WCC Lite can act as a IEC 61850 server to serve data to remote SCADA systems. For example, WCC Lite can be used to acquire data from various protocols (Modbus, IEC 60870-5-103, etc.), this data can be redirected and propagated further to a single or multiple IEC 61850 clients. IEC 61850 Server supports TCP and TLS connection types. TCP connection can be secured with password authentication.

Normal security commands are considered for execution if the command signal is found in Excel configuration. There aren’t any additional checks in command execution in any master protocol.

Enhanced security commands need feedback from master protocol to either to succeed or fail. If feedback is not received within command_ack_timeout_ms timeframe, the command is considered as failed.

Command value attributes (e.g. stVal) must be updated separately (if they need to be updated).

When using SBO commands, select is not routed to master protocol and select logic is performed only in IEC 61850 Server protocol.

To use IEC 61850 Server in WCC Lite, it has to be configured via an Excel configuration and data model must be uploaded. This configuration contains two Excel sheets where parameters have to befilled in - Devices  and Signals.

To use IEC61850 Server protocol in WCC Lite, user must upload a data model in specific format (file extension .cfg). These data models can be converted from SCL files (.icd or .cid files). To convert a data model, the user must use WCC Excel Utility. There’s a separate tab for this operation as shown in picture below.

Converted file can be uploaded in WCC Lite web interface, Protocol Hub section. Current model can be also downloaded in the same page as shown in picture below. 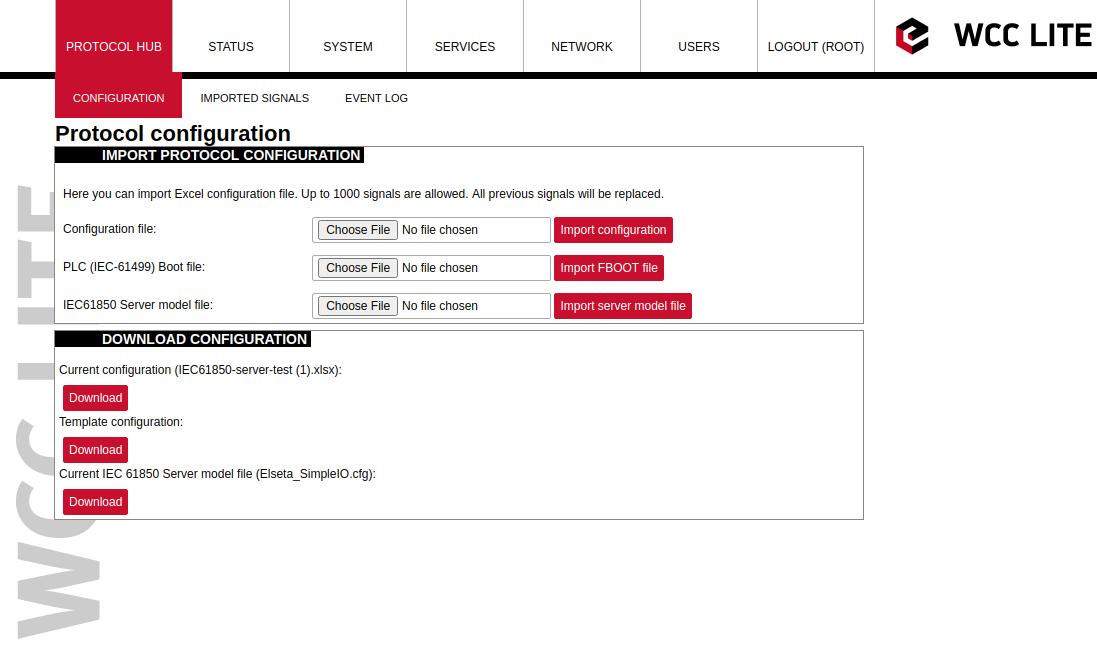 If IEC 61850 Server does not work properly (e.g. no communication between devices, data is corrupted, etc.), a user can launch a debug session from command line interface and find out why the link is not functioning properly.