To maintain the applications on a device IEC 61499 provides a management model. The device manager maintains the lifecycle of any resource and manages the communication with the software tools (e.g., configuration tool, agent) via management commands. 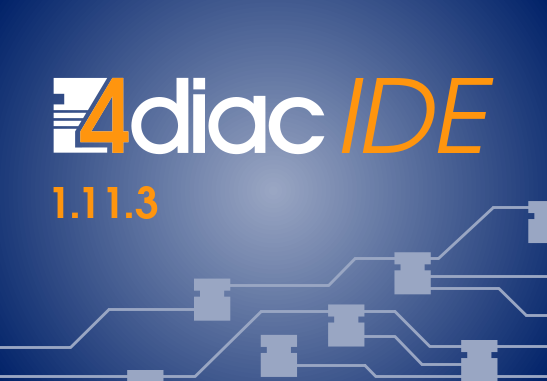 The PLC functionality in the WCC Lite is implemented using Eclipse 4diac framework, consisting of the 4diac IDE and the 4diac FORTE runtime. The system corresponds to IEC 61499, an extension of IEC 61131-3. For more in-depth instructions and function block reference please see the 4diac manual - this document is merely a quick start guide that emphasizes the specifics of tailoring the applications to run on the WCC Lite.

The 4diac IDE application is used to model logic sequences. An output file, *.fboot, is then generated and either loaded into the runtime for debugging purposes (functionality available from within the IDE), or uploaded into the controller for normal use via web interface.

During debugging, the output logic is executed directly in the runtime. Any logic loaded during debugging will be discarded after a reboot of the controller. Logic applications for regular use should be uploaded via the web interface.

It is possible to run multiple tasks at once. These tasks can either be implemented in the same screen or split into separate tasks. Please note, however, that all elements should have unique names, even between different tasks. As of 4diac IDE 1.11.3 this is not enforced between separate apps, however, 4Diac runtime application rejects such file purely because of naming issues.

The 4diac FORTE runtime is able to execute the aforementioned fboot files containing the logic. The FORTE runtime can be run on both the WCC Lite and a PC for debugging purposes. The runtime is integrated to interact with the REDIS database.

The best way to understand basics of 4Diac and WCC Lite collaboration is through an example project. This user manual intends to show the pieces needed to run PLC applications on WCC Lite. It is not intended to be definitive guide on how to use 4Diac IDE or how to interpret IEC 61499 standard.

During (at least) the first start of the IDE user will be asked to select a directory for the workspace as in Figure. Workspace is used to save files needed for projects.

After that a user should be met by the welcome window as in Figure 20. If such window is not shown, one can create create project by selecting File->New->Project and filling in the required fields (figure 21).

To create a simple application, simply drag and drop objects from the palette to the canvas and wire them accordingly. Event trigger and data pathways cannot be connected to one another. Displayed below is an example of a simple blinker application (figure 22).

Having less wiring by connecting several signals to same subnet as PCB designer (such as Altium Designer) as of 4Diac IDE 1.11.3 is not supported. However, if some parts are used frequently, it is highly advised to have less wiring by simply compiling several elements into a subapplication. For this, you would have to select elements to be grouped, press right key and select New Subapplication. You can later change names of such elements and its pins. 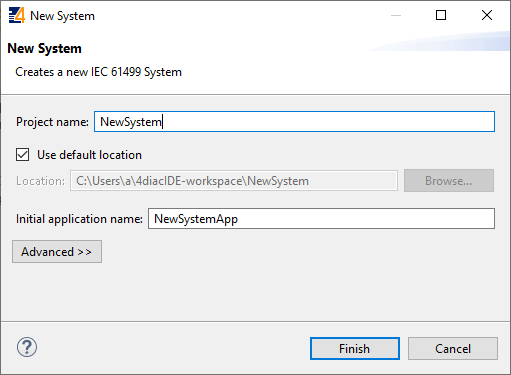 In the System Configuration section, drag and drop a FORTE_PC device, an Ethernet segment and link them (figure 23). For debugging in the local (PC) runtime, leave the address ”localhost:61499”. For testing on a WCC Lite, enter the IP address of the device, along with the port number (which by default is 61499 as well). 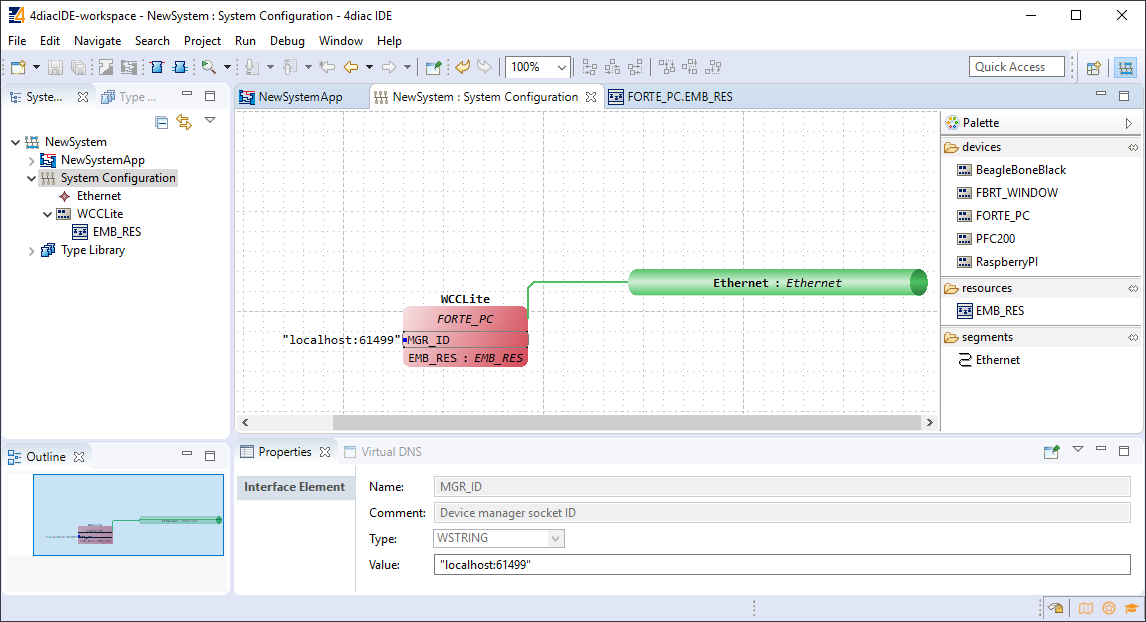 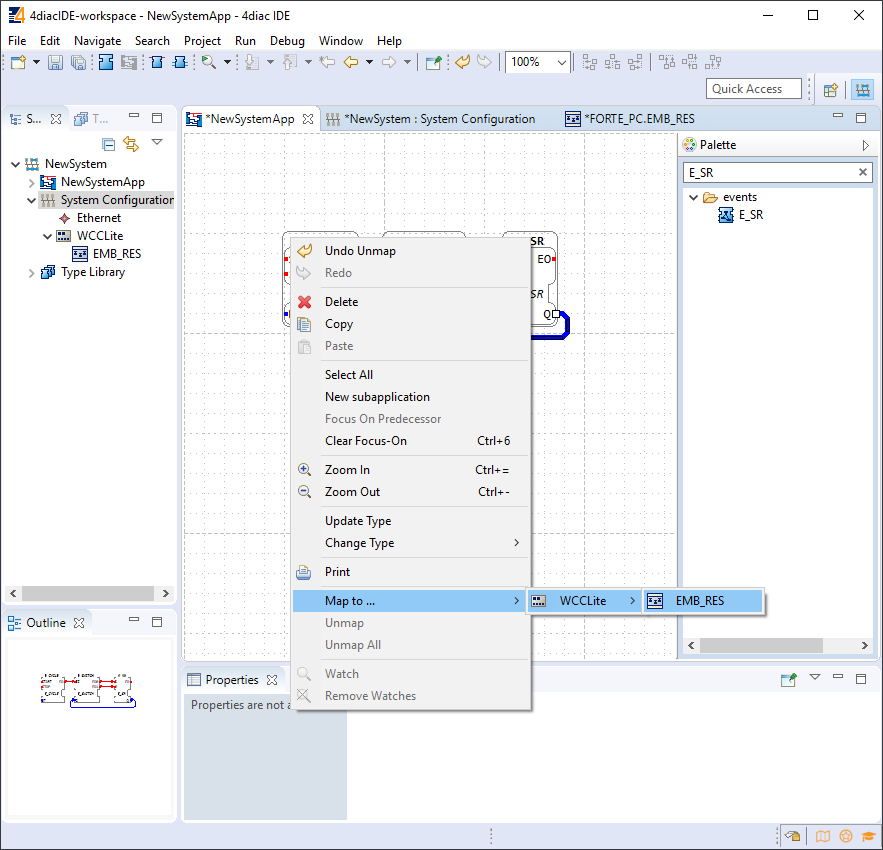 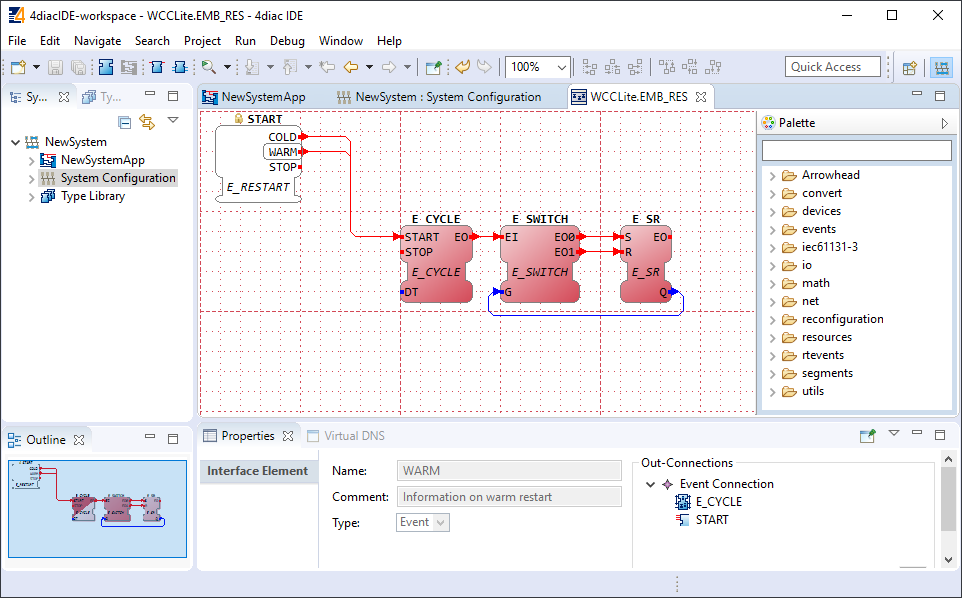 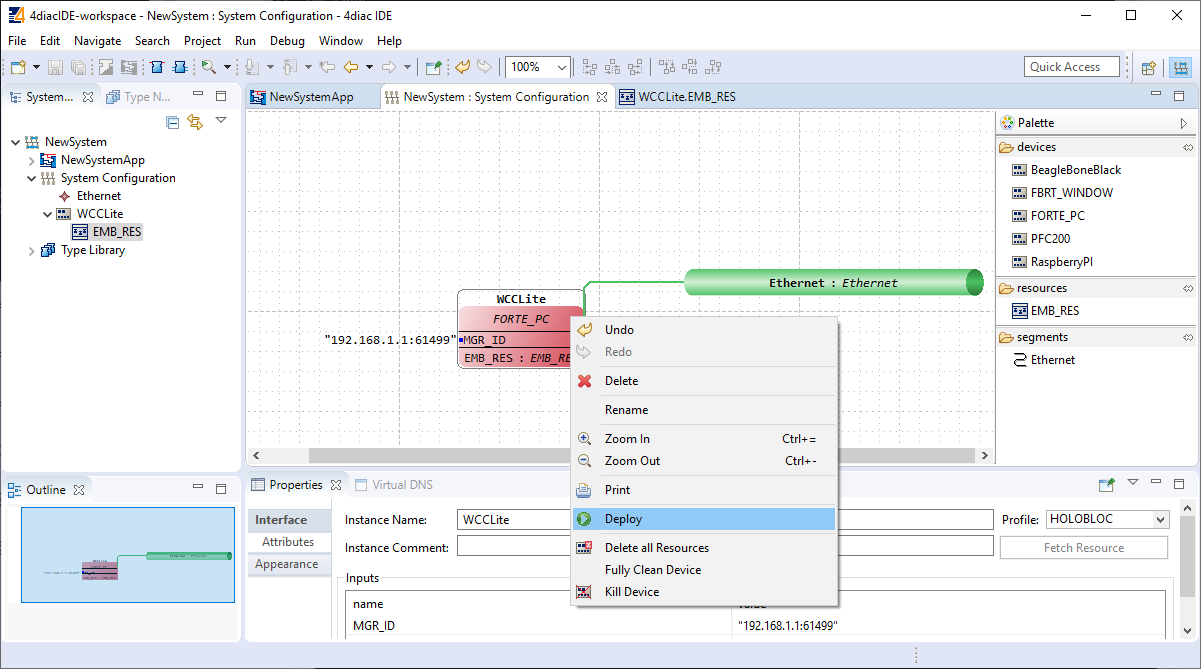