Services tab shows the services of the device and contains the following subsections:

Services tab shows the services of the device and contains the following subsections:

Having data about the device helps to easily maintain it. Telemetry agent gathers information in a compact and easily decodable way. It uses UDP packets therefore only small overhead is introduced.

However, UDP does not guarantee the arrival of sent packets therefore not every message might reach the server saving these messages.

To start using Telemetry agent a user should configure and enable it. Four options are available:

Every time timer of period length expires, a message is sent to a server of configured server if service is enabled .

Telemetry agent doesn’t start as a service if Enable agent checkbox is unchecked.

For advanced connection description auxiliary settings sets can be defined. They can be joined to the connection and can be reusable several times according to the need. Each configuration record is identified by a unique name, which is assigned in time of creation. The following diagram shows relations between connection and auxiliary sets.

Options supported by wcclite is described below.

If auxiliary data is needed, it is recommended to check or define it first.

Because of the lack of confidentiality inherent in the L2TP protocol, it is often implemented along with IPsec. This is referred to as L2TP/IPsec, and is standardized in IETFRFC 3193. The process of setting up an L2TP/IPsec VPN is as follows:

When the process is complete, L2TP packets between the endpoints are encapsulated by IPsec. Since the L2TP packet itself is wrapped and hidden within the IPsec packet, no information about the internal private network can be gathered from the encrypted packet. Also, it is not necessary to open UDP port 1701 on firewalls between the endpoints, since the inner packets are not acted upon until after IPsec data has been decrypted and stripped, which only takes place at the endpoints. A potential point of confusion in L2TP/IPsec is the use of the terms tunnel and secure channel. The term tunnel refers to a channel which allows untouched packets of one network to be transported over another network. In the case of L2TP/PPP, it allows L2TP/PPP packets to be transported over IP. A secure channel refers to a connection within which the confidentiality of all data is guaranteed. In L2TP/IPsec, first IPsec provides a secure channel, then L2TP provides a tunnel.

The primary goal is to get a working WCC Lite tunnel and establish a basic platform for further customisation. Most users will require further configuration tailored to their individual needs. If you are creating an OpenVPN server (either type), you must create security certificates using the instructions below. If you are using OpenVPN as a client, the required certificates should have been provided with your configuration details. OpenVPN can be configured either by using WCC Lite Web interface or uploading the OVPN file containing necessary parameters. OpenVPN will automatically attempt to load all *.conf files placed in the /etc/openvpn folder. Several OpenVPN recipes are suggested containing most used configurations that may only require minor changes. If a user intends setting up OpenVPN without OVPN file, it is highly advised to use these recipes and tweaking them up to individual needs. 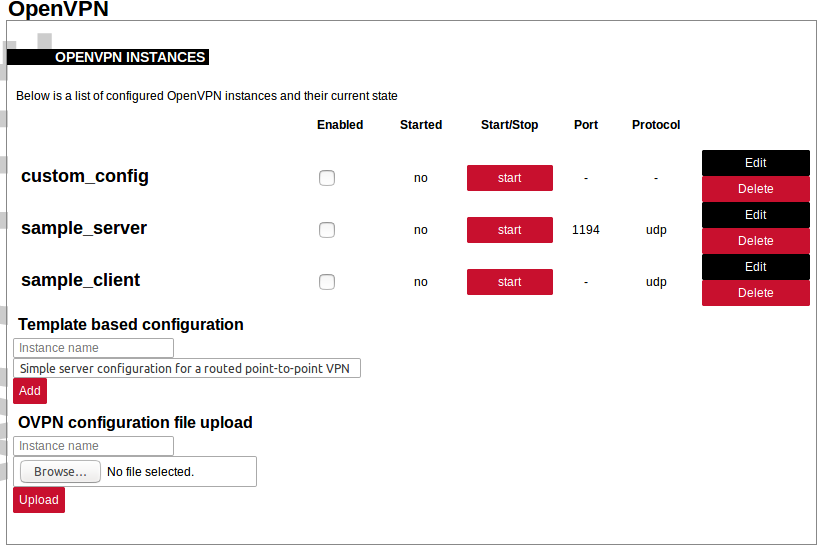 Enabled: Flag to specify if a particular configuration should be enabled;

Started: Specifies if a particular configuration has been started by OpenVPN;

Start/Stop: Button to manually start or stop any configured tunnels;

Port: Specifies the listening port of this service;

More parameters for every instance can be changed by pressing Edit button, configuration can be removed with Delete button. Pressing Edit takes the user to main configuration screen containing the options usually used in particular OpenVPN recipes. To do more specific changes user should further select Switch to advanced configuration.

OVPN files contain configuration in a textual form therefore changing parameters requires having prior knowledge about different OpenVPN parameters. It is advised to used OVPN files, however, if configuration has been pre-built beforehand and is used without further changes.

The ser2net daemon allows telnet and tcp sessions to be established with a device’s serial ports. The program comes up normally as a daemon, opens the TCP ports specified in the configuration file, and waits for connections. Once a connection occurs, the program attempts to set up the connection and open the serial port. If another user is already using the connection or serial port, the connection is refused with an error message.

The firmware of the WCC Lite features a built-in API which is accessible via the web interface.

As of version 1.2.11, it does not implement any access restriction features apart from those provided by the firewall functionality.

Individual API endpoints can be enabled or disabled via the web configuration interface at Services->API.

All endpoints are disabled by default.

Available API endpoints are shown in the table below.

The API accepts data and files as POST requests encoded as ”multipart/form-data”.

SNMP (Simple Network Management Protocol) is an internet-standard protocol for managing devices on IP networks. SNMP exposes management data in the form of a hierarchy of variables in a MIB (Management Information Base).
WCC Lite supports SNMP service which is not added to default build of firmware but can be installed as a module. It enables user to collect data on various parameters of system:
• CPU time - time spent for calculations of various processes:
user - time for user processes;
system - time for system processes;
idle - time spent idling;
interrupts - time spent handling interrupts.
• CPU load average - CPU load average for 1, 5 and 15 minutes respectively;
• Disk usage:
total - total amount of storage in the device (in kB)
available - amount of storage available to store data (in kB)
used - amount of storage used in the device (in KB)
blocks used percentage - blocks (sectors) used to store data in a disk (in kB)
inodes used percentage - the inode (index node) is a data structure in a Unix-style file system that describes a file-system object such as a file or a directory. Each inode stores the attributes and disk block location(s) of the object’s data.
• Memory usage - RAM usage statistics:
total - total amount of RAM in the device (in kB);
available - unused amount of RAM in the device (in kB);
shared - shared amount of RAM between multiple processes (in kB);
buffered - refers to an electronic buffer placed between the memory and the memory controller;
cached - a portion of memory made of high-speed static RAM (SRAM) instead of the slower dynamic RAM (DRAM) used for main memory;
• Network interfaces:
MTU - maximum transmission unit to be sent over network;
speed - rate of network transmission;
physical address - unique MAC address assigned to a device;
tx/rx: byte, packet, drop, error count;
• System properties:
uptime - time since the device was turned on;
process uptime - time since the process has been started;
hostname - a label that is assigned to a device connected to a computer network;
name - name of the device (if defined);
location - location of the device (if defined).