In addition to the network interface status, several actions may be performed:
Connect/Reconnect: Connect to configured interface network if it does not do it automatically. If it already connected to the network it will be trying to reconnect to it.
Stop: Shutdown interface. If you are connected through this interface the connection may be lost.
Edit: Edit interface settings.
Delete: Delete interface.
Add new interface: Adding new Ethernet, GSM or wireless interface with the custom name, protocol and etc.

Changes will only take effect after device reboots.

Network interfaces can be configured on the common page, which can be accessed through add new interface or edit button. 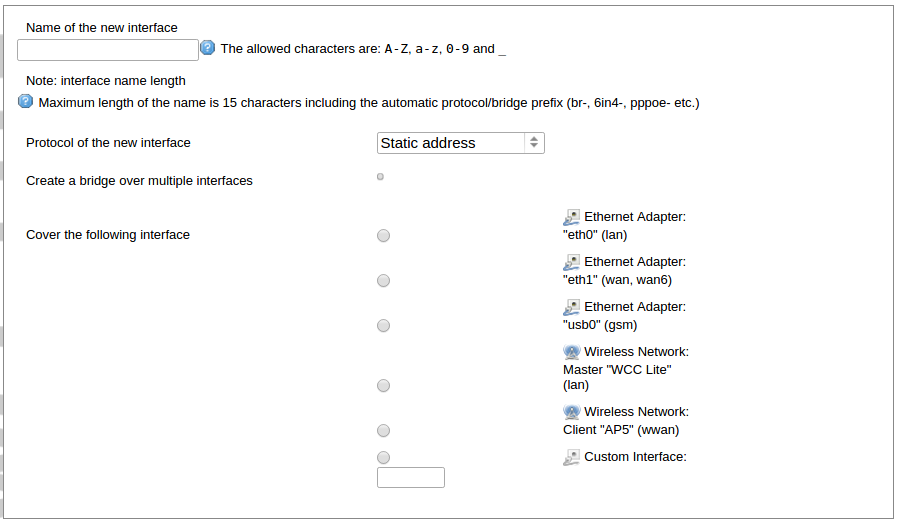 The following options can be defined in the interface creation panel: name of the interface, protocol, coverage of a particular interface or bridging with other interfaces. After the general setup is done, more detailed settings can be set. 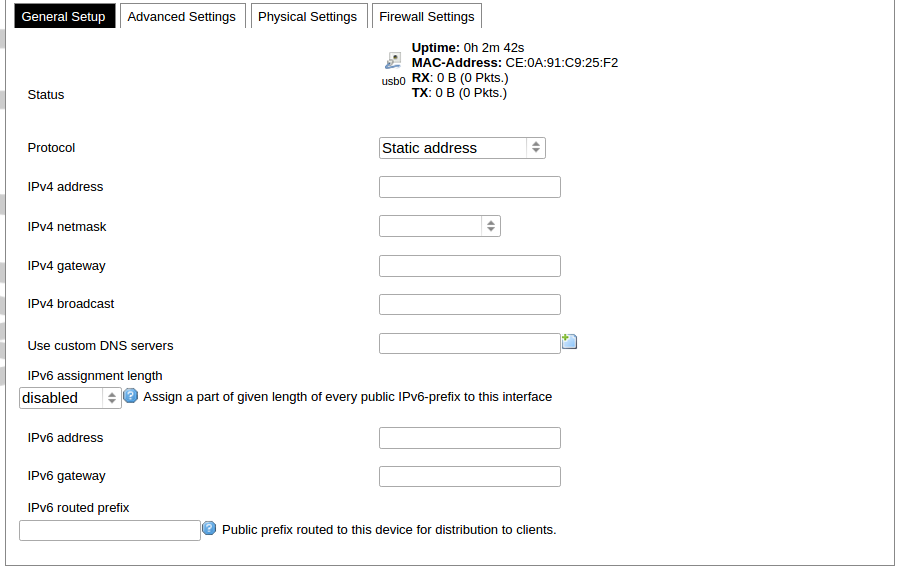 Note: Make sure you won’t change GSM interafce’s protocol, which is set by default to WWAN. Changing this parameter will lead to undefined GSM modem behaviour. 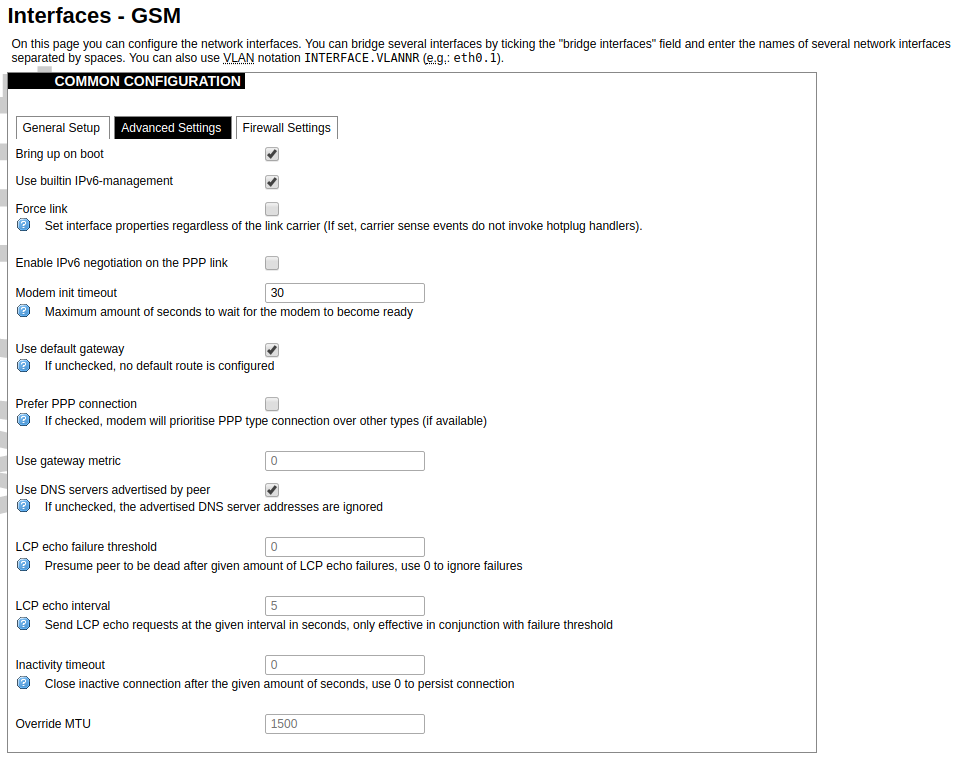 Advanced Settings tab enables user to configure advanced settings for mobile communication. It includes the following options:
Bring up on boot: Checkbox to start a GSM interface on startup;
Use builtin IPv6-management: Checkbox to select if the device is going to use its own tools to manage IPv6 transport layer messages;
Force link: Specifies whether IP address, route, and gateway are assigned to the interface regardless of the link being active or only after the link has become active; when active, carrier sense events do not invoke hotplug handlers;
IPv6 support: User can select if IPv6 support is handled automatically, manually or disabled altogether;
Modem init timeout: Maximum amount of seconds before the device gives up on finishing initialization;
Use default gateway: Uses the default gateway obtained through DHCP. If left unchecked, no default route is configured;
Prefer PPP connection: If ,the modem, supports PPP and any other communication protocol (e.g. QMI, RNDIS and etc.), prioritise PPP type connection;
Use gateway metric: The WAN configuration by default generates a routing table entry. In this field you can alter the metric of that entry. Higher metric means higher priority;
Use DNS servers advertised by peer: Uses DNS servers obtained from DHCP. If left unchecked, the advertised DNS server addresses are ignored;
LCP echo failure threshold: LCP (link control protocol) is a part of PPP (Point-to-Point Protocol) and helps to determine the quality of data transmission. If enough failures happen, LCP presumes link to be dead. 0 disables failure count checking;
LCP echo interval: Determines the period of LCP echo requests. Only effective if LCP echo failure threshold is more than zero;
Inactivity timeout: Station inactivity limit in seconds: if a station does not send anything, the connection will be dropped. A value of 0 can be used to persist connection.
Override MTU: Set custom MTU to gsm interface.

GSM configuration ends with firewall settings. A user can assign an already defined firewall zone or create a new one.

The wireless network interface parameters and configuration are described in this section.

List of associated wireless stations.
The Device Configuration section covers physical settings of the radio hardware such as channel, transmit power or antenna selection which are shared among all defined wireless networks (if the radio hardware is multi-SSID capable). Per network settings like encryption or operation mode are grouped in the Interface Configuration.

DHCP server and DNS forward for NAT firewalls is described in this section. 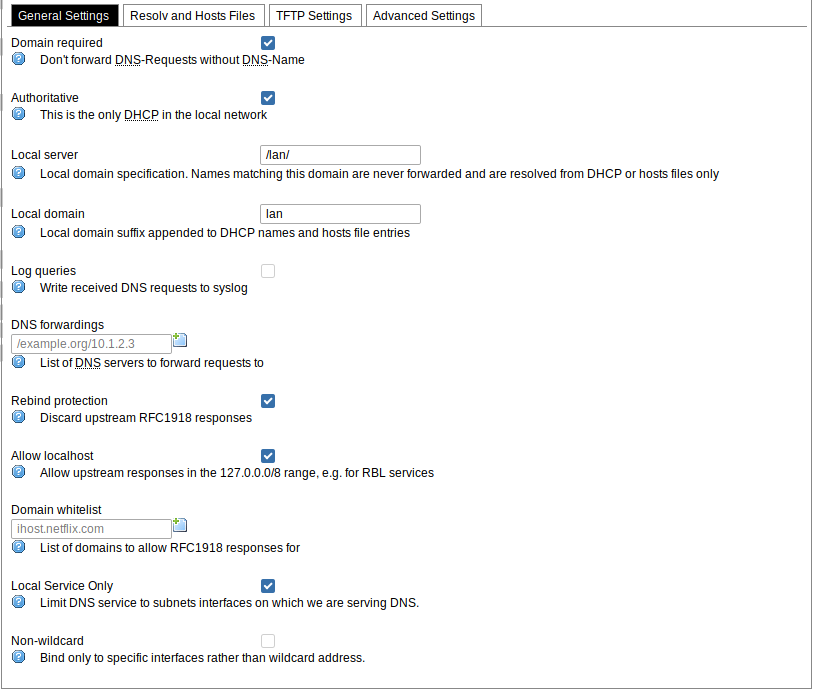 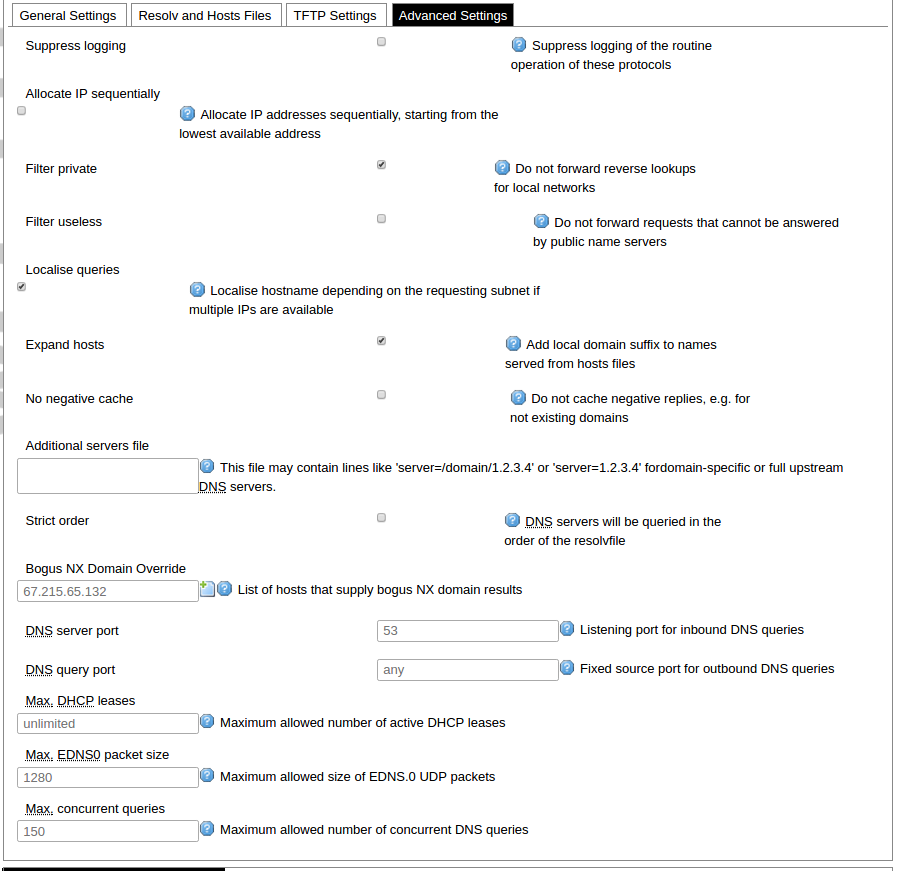 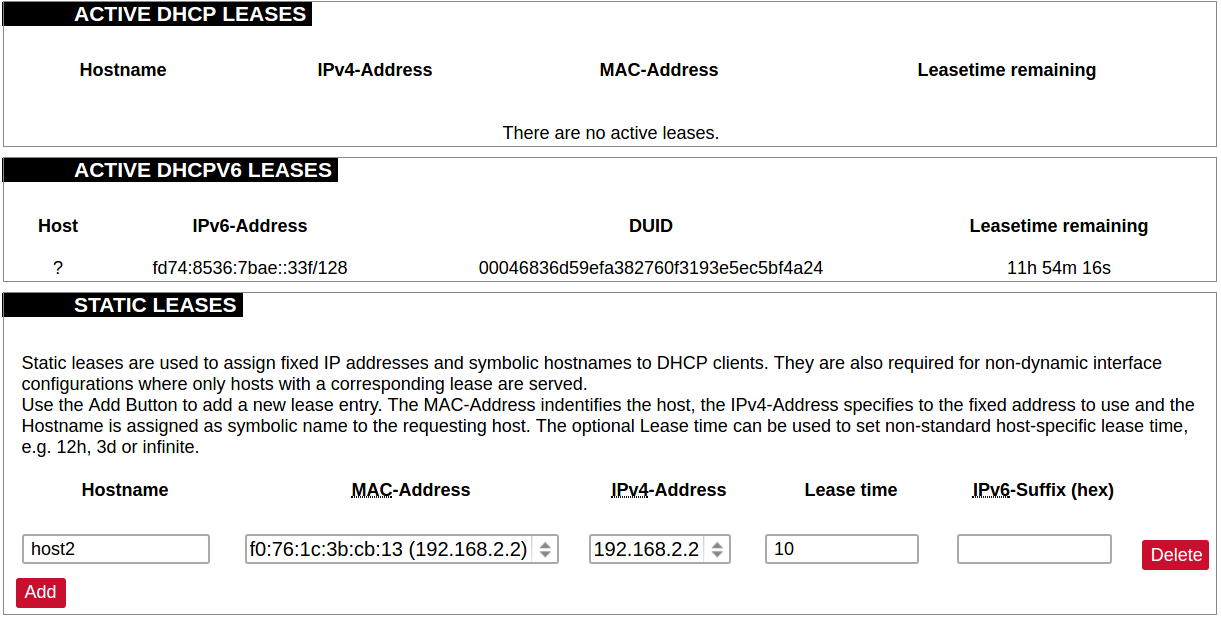 List of active DHCP and static leases. It is also possible to assign fixed IP addresses to hosts on the network, based on their MAC (hardware) address.

List of existing host names. Addition or deletion is allowed for the user.

Routes specify over which interface and gateway a certain host or network can be reached.

Additional actions can be performed with zones: add, edit, delete. 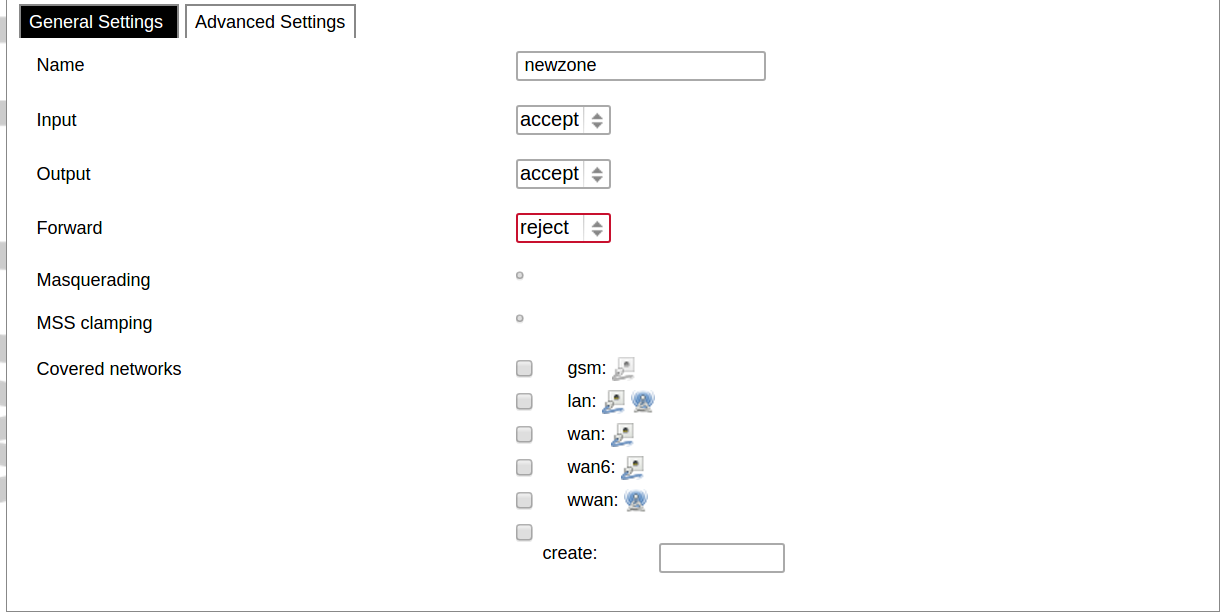 Common properties of newly created or edited zones chan be edited in this panel. The input and output options set the default policies for traffic entering and leaving this zone while the forward option describes the policy for forwarded traffic between different networks within the zone. Covered networks specify which available networks are members of this zone.

Advanced settings of new created or edited zone. Restrict to address family option defines to what IP families the zone belongs to IPv4, IPv6 or both. Restrict masquerading to given source/destination subnets defines one or more subnets for which the masquerading option is applied to. Connection tracking and logging options enable additional information gathering on the zone. 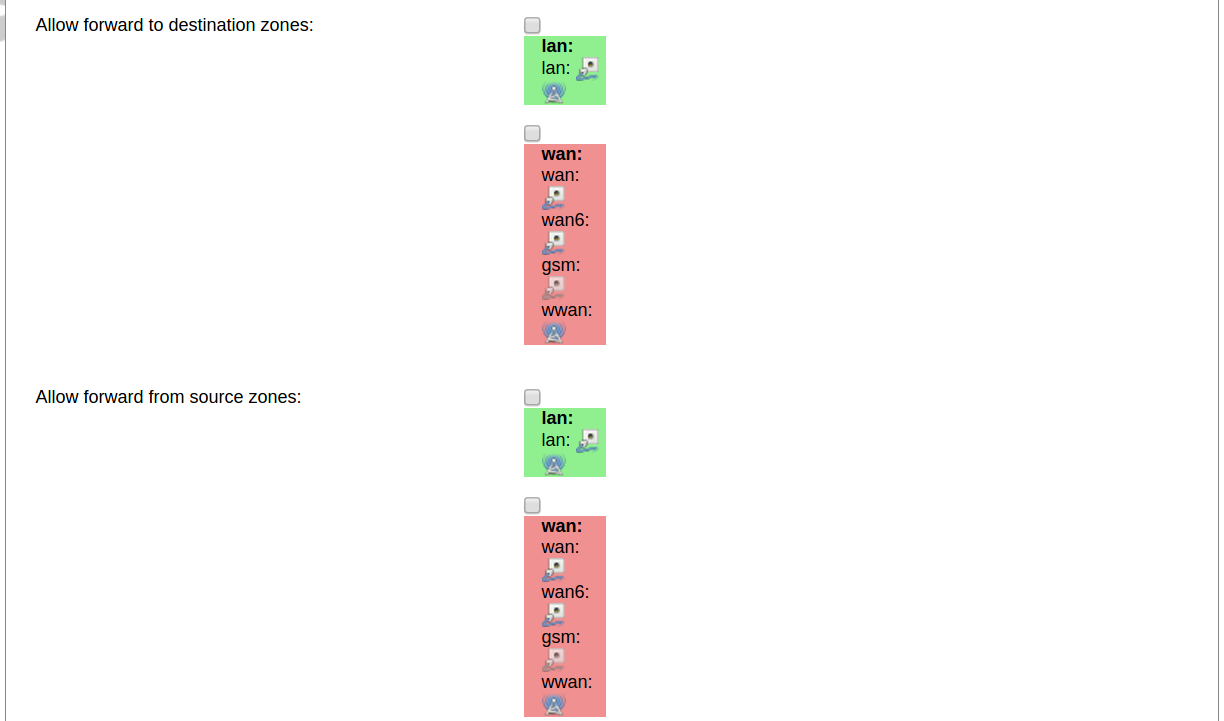 Traffic rules which define policies for packets traveling between different zones.
Name: The name of the traffic rule.
Match: Informs what ICMP types are matched.
Action: Informs what action would be performed.
Enable: Enable (checked) or disable the rule.
Sort: Allows to sort rules.

The user can add, edit or delete traffic rules. For every rule can be defined these options: name,restrict to address family, protocol, match ICMP type, source and destination zones, source MAC, IP addresses and port, destination IP address and port, action and extra arguments, month and weekdays for which rule will apply, start/stop dates and times, time in UTC.

Source NAT, which is a specific form of masquerading which allows fine grained control over the source IP used for outgoing traffic, for the example to map multiple WAN addresses to internal subnets.
The user can add, edit or delete source NAT rules. For every rule can be defined these options: name, protocol, source and destination zones, source, destination, SNAT IP addresses, ports, extra arguments, month and weekdays for which rule will apply, start/stop dates and times, time in UTC.

Custom rules allow to executing arbitrary iptables commands which are not otherwise covered by the firewall framework. The commands are executed after each firewall restart, right after the default ruleset has been loaded.

Diagnostics tools which can be used to diagnose some of the networking problems: ping, traceroute and nslookup. 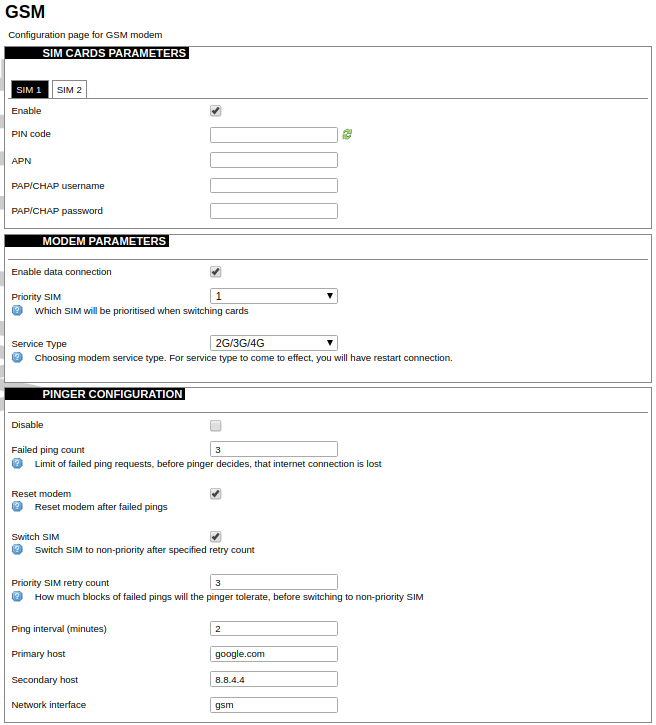 Pinger is a service which pings defined hosts  to check internet connection. If both of these hosts are unreachable pinger will wait and restart modem (or switch SIM card, if Dual-SIM modem is installed in WCC Lite)
Disable: Disable pinger functionality.
Failed ping count: Limit of failed ping requests, before pinger decides that internet connection is lost.
Reset modem: If checked, pinger resets gsm modem after ”Failed ping count”.
Switch SIM: If checked, pinger switches SIM to non-priority after ”Priority SIM retry count”. If internet connection is not available with non-priority SIM as well, pinger switches back to priority SIM after one failed ping attempt.
Priority SIM retry count: How many blocks of failed pings will the pinger tolerate, before switching to non-priority SIM.
Ping interval (minutes): Interval between ping requests.
Primary host: The host that will be pinged first.
Secondary host: The host that will be pinged second, if the primary host fails.
Network interface: GSM network interface name.

GSM Pinger is used to detect the status of network connection via cellular network. This status is written to file (/var/run/board/internet-status) and can be configured to be sent to SCADAs. If pinger is disabled, status is always set equal to zero and should not be trusted to represent internet status. Additionally, this status is reflected in the ”Status”->”GSM Status” window.

This is Pinger functionality described step by step:
• Pinger will ping the primary host every 2 minutes.
• If the primary host fails, pinger redirects to the secondary host immediately.
• If either primary or secondary host is responding to ping requests, pinger will continue testing connection every ”Ping interval (minutes)” parameter and no further action is taken.
• If both primary and secondary hosts are unreachable, pinger will start pinging these hosts every ”Ping interval (minutes) / 2” minute for ”Failed ping count” times.
• If hosts are still unreachable, pinger will try to switch SIM and restart modem (if corresponding parameters are set) or will restart immediately if single SIM modem is used.
• SIM card is switched to non-priority SIM after ”Priority SIM retry count” failed modem restarts with priority SIM. If a non-priority SIM fails, it is switched to priority SIM in the next pinger action.

Table below shows, which card is expected on boot, when selectiom is made between Enable/Disable SIM cards and Primary card.

In computer networking, Layer 2 Tunneling Protocol (L2TP) is a tunneling protocol used to support virtual private networks (VPNs) or as part of the delivery of services by ISPs. It does not provide any encryption or confidentiality by itself. Rather, it relies on an encryption protocol that it passes within the tunnel to provide privacy.

The entire L2TP packet, including payload and L2TP header, is sent within a User Datagram Protocol (UDP) datagram. It is common to carry PPP sessions within an L2TP tunnel. L2TP does not provide confidentiality or strong authentication by itself. IPsec is often used to secure L2TP packets by providing confidentiality, authentication and integrity. The combination of these two protocols is generally known as L2TP/IPsec (discussed below). The two endpoints of an L2TP tunnel are called the LAC (L2TP Access Concentrator) and the LNS (L2TP Network Server). The LNS waits for new tunnels. Once a tunnel is established, the network traffic between the peers is bidirectional. To be useful for networking, higher-level protocols are then run through the L2TP tunnel. To facilitate this, an L2TP session (or ’call’) is established within the tunnel for each higher-level protocol such as PPP. Either the LAC or LNS may initiate sessions. The traffic for each session is isolated by L2TP, so it is possible to set up multiple virtual networks across a single tunnel. MTU should be considered when implementing L2TP. The packets exchanged within an L2TP tunnel are categorized as either control packets or data packets. L2TP provides reliability features for the control packets, but no reliability for data packets. Reliability, if desired, must be provided by the nested protocols running within each session of the L2TP tunnel. L2TP allows the creation of a virtual private dialup network (VPDN) to connect a remote client to its corporate network by using a shared infrastructure, which could be the Internet or a service provider’s network.

In order to create a L2TP tunnel following steps are required: 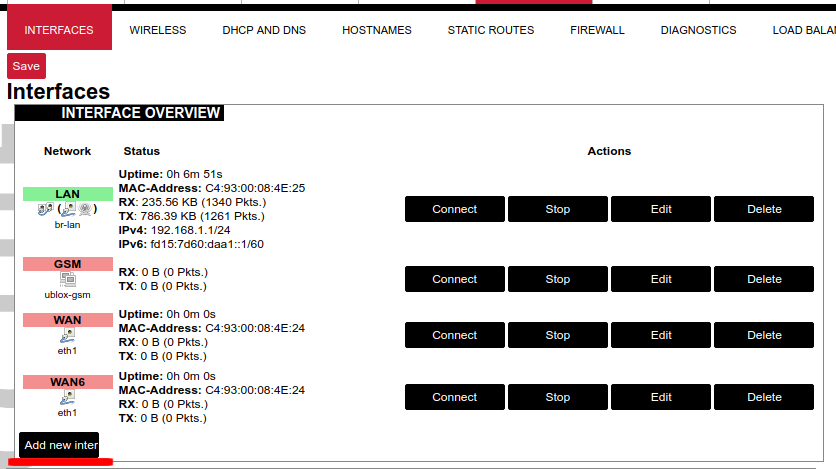 4. Save and apply the new configuration. A new network interface will appear.