System tab includes various properties, configuration, and settings of the system and contains the following pages:

Basic aspects of the device can be configured. These include time settings, hostname, system event logging settings, language and theme selection.

General settings of the WCC Lite device are defined as follows:
Local Time: Current local time.
Hostname: The label that is used to identify the device in the network.
Timezone: A region of the globe that observes a uniform standard time. The time zone number indicates the number of hours by which the time is shifted ahead of or behind UTC – Coordinated
Universal Time. Some zones are, however, shifted by 30 or 45 minutes.

Cron Log Level: Cron has three output levels to choose from to write to its logs. Possible options are
described in a table below.

WCC Lite has an NTP client to synchronize date and time with external sources. It is not the only source for synchronization, it can also be done using methods defined in IEC-60870-5 protocols.

Administrator password can be changed. To change it the combination of digits and letters of the alphabet should be entered and then confirmed in Confirmation field by typing in again.

It is advised not to use the default password. 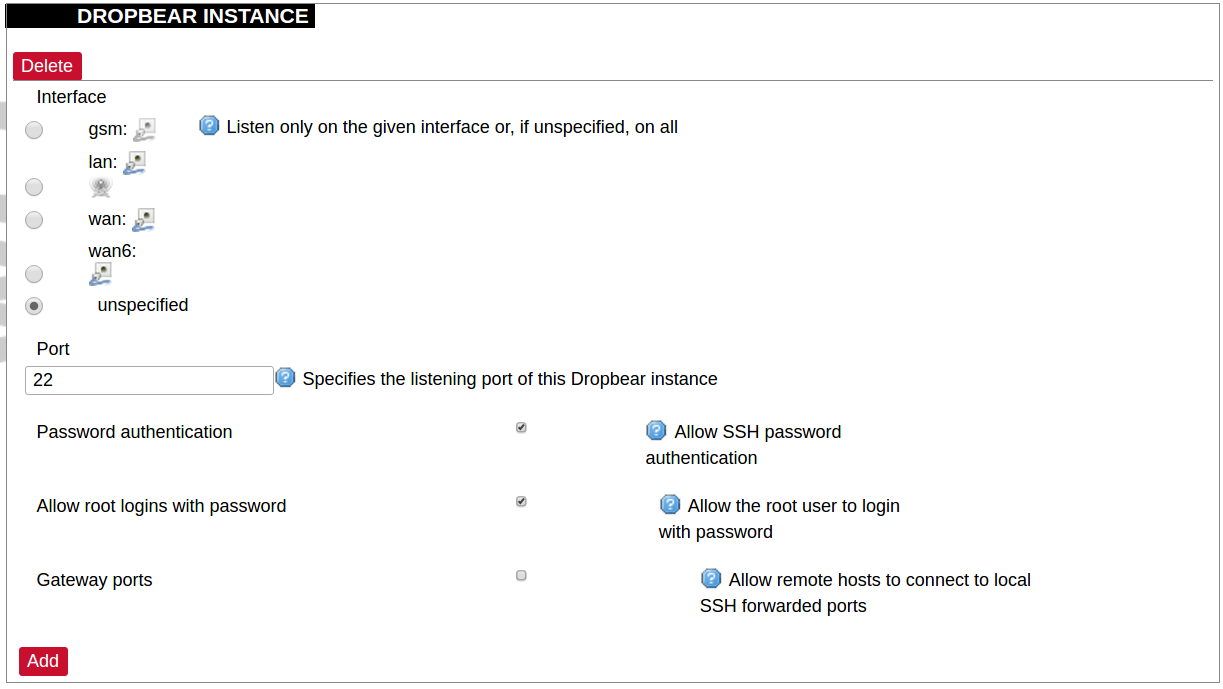 Dropbear options are defined as follows:
Interface: Listen only on the given interface or on all, in unspecified.
Port: Specifies the listening port of this interface.
Password authentication: Allow SSH password authentication.
Allow roots logins with password: Allow the root user to login with the password.
Gateway ports: Allow remote hosts to connect to local SSH forwarded ports.

SSH keys can be added via WCC Lite web interface. They might be helpful if the user logs into device frequently and does not want to always have to write his credentials.

WCC Lite by default is shipped with a default certificate for HTTPS connection. This certificate only enables connecting to device via web interface and might cause warnings from a web browser. To eliminate them, user can use his own certificate to secure access to web interface.

User can use certificates uploaded to a certificate storage. It should be noted that only valid certificates with *.pem extension can be used. Certificate to be used is validated every time device is restarted.
If validation fails, default certificate is used. This is done to prevent user from losing device access via web interface.
For new certificate to come to effect user should restart the device.

Individual packages can be installed via WCC Lite web interface. They can either be installed using web link or selected from the pre-defined feeds.

Various options can be selected when installing packages, however, default ones should work well enough and it’s advised to only change them for advanced users.

Feeds from which packages are listed for update are defined in Open PacKaGe management (OPKG) configuration that can be changed easily from user interface.

Specific distribution feeds can also be added for special cases if standard ones do not fit the needs.

User should not disable processes that are essential for device operation as it can render the device unusable.

User can optionally run scripts and programs on device startup by putting them into a /etc/rc.local file. This file can be updated from WCC Web interface.

Example in the pictures shows how to execute the disk usage command to get the directory sizes every 6 p.m. on the 1st through the 15th of each month. E-mail is sent to the specified email address.

List of mounted file systems, some of which can be dismounted manually.

List of mount points which can be enabled, disabled or deleted.

Swap section is used to describe the virtual memory that can be used if there’s a lack of main memory. WCC Lite does not use any virtual memory by default.

It should be noted that virtual memory might do a lot of reading and writing operations. As WCC Lite uses SD card as an additional flash memory, it is highly advised to not use swap to reduce wearing.

WCC Lite has three LEDs that can be configured: WAN, LAN and WLAN. All of the LEDs have a default configuration which should fit most of the cases.

LED Name: Colour and location of the LED. These can be changed, however, normally they should be left unchanged.

Default state of the LED: On/Off.
Trigger: One of the various triggers can be assigned to an LED to changes its states. Possible values are shown in a table below.

Table. Possible trigger for an LED:

Device: Network interface which is going to be tracked.

Software update allows to upgrade the software running in WCC Lite. It is recommended to keep the device up to date to receive the latest features and stability fixes.

Backup archives contain complete WCC Lite configuration that can be restored at any time. A file will be downloaded by your browser when creating a backup. This file can be later uploaded to the web page to restore configuration.

Generated backup archive should only be applied to the same firmware version it was generated. Applying backup to a different firmware version might render some parts of operating system unstable or even unusable 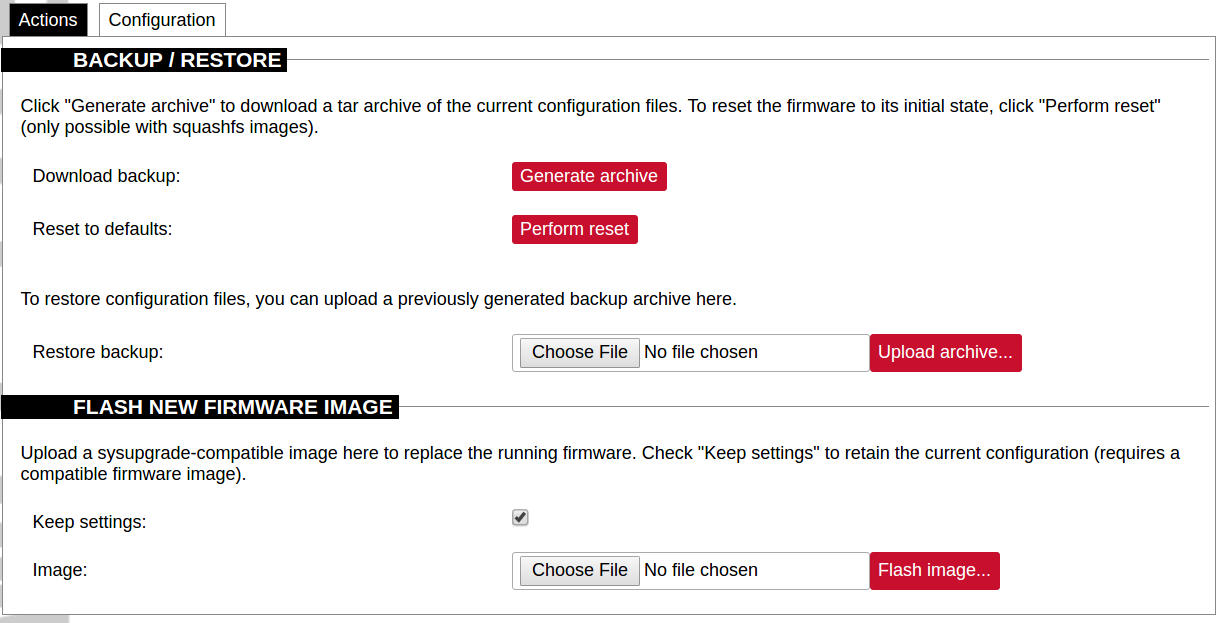 A user can choose to keep existing settings after an upgrade. Marking Keep Settings checkbox preserves files listed in /etc/sysupgrade.conf and /lib/upgrade/keep.d/. It is advised to do a clean install and use backup files to restore settings later if a user intends to make a major system upgrade. 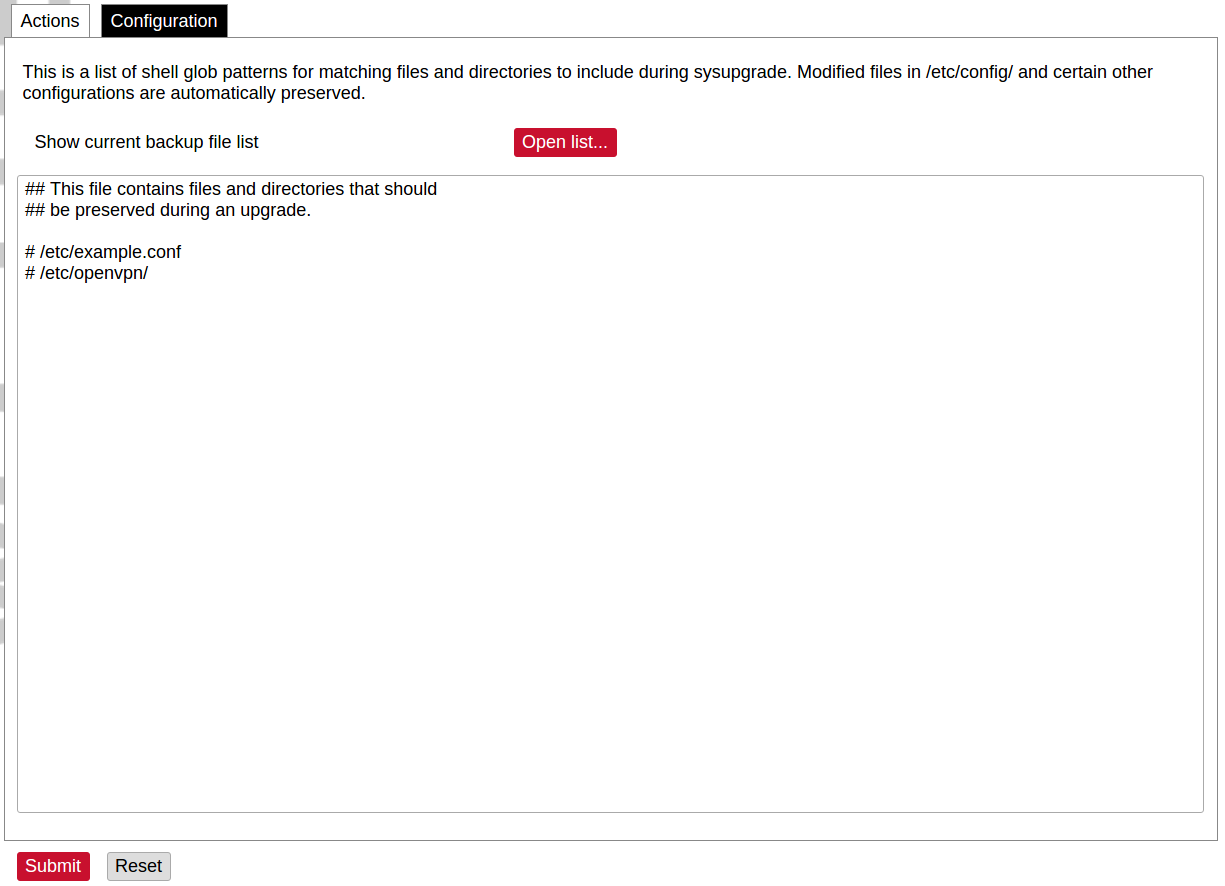 A file name /etc/sysupgrade.conf can be updated via WCC Web interface. To preserve additional file user should add them to backup file and press Submit. To get the whole list files that would be backed up press Open list.... It is advised to check it before doing a back-up or an upgrade while keeping settings.

This reboots the operating system of the device.